How to create CartoType maps

You will need the program makemap, which you can download using one of the links below

The program exists in these versions:

To uninstall the makemap tool, delete the program from your computer.

You can use various data formats. Data formats are inferred from file extensions. Here are the main ones:

Data from several data sets can be combined into a single map: just put as many filenames as you like on the command line.

The map data files (CTM1 files) are usable by any version of CartoType.

makemap does as much as possible automatically. For example, if you use this command:

Ordinary CTM1 files are limited to 4Gb, but if you need to create a file larger than that (you'll get an error message from makemap telling you if that's necessary) you should use the command-line option /largefile=yes. That option stores internal file positions in 5 bytes instead of 4 bytes, and thus allows files up to 2^40 bytes or 1 terabyte in size. You should use the 64-bit version of makemap when creating large files.

However, you need a lot of RAM: over 20Gb to create a map of the whole of Germany or France; and makemap may take several hours to run.

Large files can be used with the Windows, iOS and .NET SDKs but not yet with Android.

You can use PBF data as input to makemap by using the osmconvert program to translate it to OSM format. This is the easiest way to use data obtained from Geofabrik, because PBF files are even smaller than OSM files compressed using bzip2. For example, here's a Windows command line to create a map of Britain and Ireland (omitting some command-line options not needed for this example):

This Windows command line can be used to decompress to standard output and feed that data to makemap (omitting some command-line options not needed for this example):

This method uses data from OpenStreetMap, a organisation that is creating a world-wide street map from data collected by volunteers using GPS devices.

Download OSM files from one of the links here

or you can make OSM files for any area:

Use the Export button in the main OpenStreetMap map page. Unless the area you want is very small you'll see a message stating that the area is 'too large to be exported as OpenStreetMap XML Data'. In that case, just click on 'Overpass API': 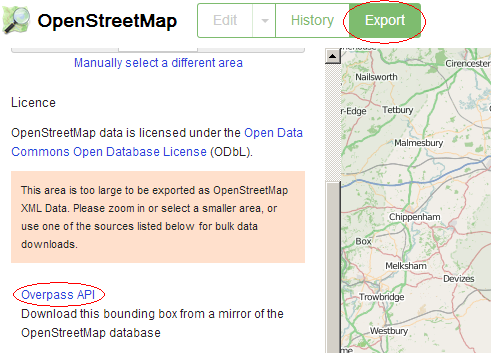 Note: there is a bug (logged as ticket 5169 in the OSM issue tracker) in the script used by OSM for its Overpass query. It can cause lakes and other large polygon areas to be omitted if they overlap the bounds. If that happens (as it will, for example, when exporting greater Stockholm, Sweden), use this query, with your values for the bounds w, s, e and n:

Paste it directly into the upper query box at http://www.overpass-api.de/query_form.html.

On the Apple Macintosh makemap_mac needs to be run in the 'bash' shell, which can be accessed by opening a terminal window. You need to give the program executable permission before you first use it:

How to add coastlines to a CTM1 file

The best way is to use coastline data created by Jochen Topf, a member of the OpenStreetMap community.

If your coastlines.makemap file is in the directory you run makemap in, you don't need to specify it on the command line: makemap will notice that you haven't imported coastlines and import them automatically.

To create standard route data for a map, use /route=yes.

Standard routing is better if you have enough memory: if you're creating any map for a desktop computer or server, or a city map or smaller for Android or iOS. It runs faster and allows route profiles to be chosen and changed at run-time.

Using a .makemap file to control the conversion from OSM to CTM1 format

You can optionally control the way data is converted from OSM to CTM1 format, and which data is used, and which data is omitted, using an XML file containing rules. By convention such a file has the extension .makemap. You supply its name on the command line, before the names of any osm files it needs to affect, using /input=<rules file name>

The standard rules are stored by makemap. You can write them out, so that you can edit them and create a customised version, by using the following command:

You can import SHP data using a .makemap file like this:

See the main documentation for .makemap files for a full explanation of how to convert the fields in each map object to your desired CTM1 attributes.

Digital height data can be obtained from more than one source. A convenient one is the United States Geological Survey, which publishes data as tiles for one-degree-square sections of the world in a simple format called HGT. Here is the site containing the data and documentation. Other sources are described, reviewed and referenced at ViewFinder Panoramas.

Disclaimer: as with all map data, neither Cartography Ltd nor CartoType Ltd nor any of its officers, directors, employees or sub-contractors take responsibility for or guarantee the copyright status or intellectual property status of this data. It is the user's responsibility to obtain permission for using data.

First download SRTM3 data covering the area you are interested in. For example, the USGS data for Eurasia is here. The files will usually be zipped and have names like N00E072.hgt.zip. Unzip them and don't change the names: makemap uses the filenames to identify the correct data. The names refer to the south-west corner of the one-degree tile. Put all the files in a single directory. In the example below, the directory name is \usgs-height-data.

Then add it to your map using the /usgs command-line parameter in the makemap tool. The format is

and you can specify the extent as either three numbers, giving the OpenStreetMap map tile number in the form zoom, x, y; or four numbers, min-long, min-lat, max-long, max-lat. If you omit the extent, you can specify it earlier on the command line using /extent; if you don't specify it in either place it will be generated automatically from the combined bounds of all the other data except the coastlines.

Other parameters affecting height data are:

/interval=n umber - interval between terrain sample points in metres; default is 250; the SRTM3 data is sampled at 90m so for this data there is no advantage in using an interval less than 90. The smaller the interval, the larger the data.

Here is an example showing how to generate a map of Greece with both height in feet and shadows. (Don't use both layers unless you are happy to incur the cost of slightly slower display and larger data.)

Notes on parameters used in the example

/lowreslayers=yes - create sets of layers for different zoom levels - speeds up map display but increases data size by about 30%.

/usgs=\usgs-height-data - specify the location of the height data (.HGT) files; this parameter creates a terrain-shadow layer, which is the default

/terrain=height-feet /usgs=\usgs-height-data - these two parameters change the terrain mode to create a terrain-height-feet layer, and reload the height data

/input=coastlines.makemap - load the SHP data for the coastlines (see above)

Postcodes are automatically imported from OpenStreetMap data by the standard import rules. However, only a few countries like Germany have complete or almost complete coverage of postcodes in their OpenStreetMap data. Therefore it is useful to be able to import postcodes from another source. They can be obtained from the GeoNames site, which has zipfiles with names made from the standard two-letter country code, plus the extension .zip. Thus the postcodes for Austria are in the file AT.zip. This data is available under the creative commons attribution license. Each zipfile contains a file with the extension .txt: e.g., AT.txt, BE.txt, etc.

The postcodes in a GeoNames file are points, so this data is not quite as useful as the polygon data available for Germany and some other countries, which enables more accurate geocoding; with point data, CartoType has to assume that a place belongs to its nearest postcode point, which is not always true.

GeoNames postcode data is imported into the 'postcode' layer as point objects. The postcode itself becomes the 'pco' attribute, and the place name, if any, associated with the postcode, becomes the label of the object.

Note on GB data. One of the GeoNames files for Great Britain, GB_full.csv.zip, contains the file GB_full.csv. You will need to rename it to GB_full.txt before using it with makemap.